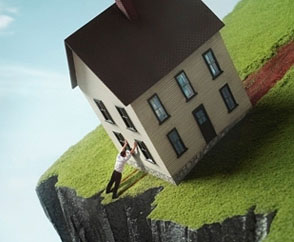 The majority of US consumers list their home as their largest asset. According to The Financial Times, mortgages average approximately 50% of total home value. The average US home value has dropped 30% since 2008, wiping out approximately $9 trillion of equity (Zillow.com). Because of the leverage a mortgage affords, this means that the average homeowner equity has declined over 60%. The problem is, the financial boom that most Americans enjoyed over the last 30 years was afforded by a debt bubble which allowed homeowners to live the American Dream by cashing in on their home equity.

If housing stabilized and started to climb again in value, we may be able to conclude that the 2008 housing crash was only a bump in the road and all is well in the coming future. So let’s look inside the numbers to see if we can determine where real estate is heading.

According to the Case-Shiller index, home prices fell by 1.3 % in October of 2010 across 20 major cities. Estimates of homes either with loans delinquencies or in some stage of foreclosure are as high as 8 million. On top of that there is an estimated 5.5 million households tied to mortgages at least 20% higher than the property value.  The good news is that the wave of resets from subprime loans, which caused the financial meltdown in 2008, are mostly behind us. The bad news is that there is $2.4 trillion in Alt-A and Option ARM mortgage resets ahead of us (see Figure 2).

Of the $2.4 trillion in mortgages resetting over the next two years, approximately $750 billion are option ARMs, nearly all written at the peak of the bubble.  Unemployed consumers have no chance of paying back these loans. Many others who could, won’t, because it is in their best financial interest to walk away. As a result, the Alt-A and Option ARM defaults are going to be massive.

Most variable rate mortgages are tied to the 1 Year LIBOR (London Interbank Offered Rate), which currently stands at 0.78% (down from 0.96% a year ago). This should make the reset amounts on Alt-A and Option ARM loans painless, right? Not so fast. Low reset rates help, but many of these mortgages had a “teaser” rate, or a minimum payment required for the first five years or so. This minimum payment didn’t represent principal or interest. The teaser rate was a small fee that allowed people to buy into a larger home than they could otherwise afford. After five years it converts to a conventional mortgage of principal and interest, with either a stated interest or floating rate, which will increase the average payment on these loans 3- to 4-fold. If this happens the banks may need to start a business in selling keys.

The coming tsunami of these types of mortgages has put me in a very watchful position as the protector of your assets. What would this mean to your portfolios if we get another 20% decline in real estate? Inflation wouldn’t be a concern, even with the Fed printing money, because the effect of another 20% decline in housing would cause deflation. Deflation is the Fed’s greatest concern; so in response the Fed would continue to run the printing press. Would the rest of the world continue to buy our printed money?  This scenario would bode well for gold, especially since the emerging world is fighting runaway inflation. Retail and consumer discretionary spending would clearly underperform as US household net worth continues to decline. Added to the commercial real estate problem, mounting foreclosures would result in the failure of even more regional banks and spur massive consolidation in the industry.

The result could be a bifurcated world, where we see runaway inflation in the emerging world, and price destruction and deflation in the developed world. I think David Rosenberg of Gluskin Sheff put it best when he said, “The laws of supply and demand tell us housing is going to get cheaper, a lot cheaper.

*This article is not a recommendation to buy or sell and should not be considered investment advice. Please consult IPS or another financial advisor before making any investment decisions.