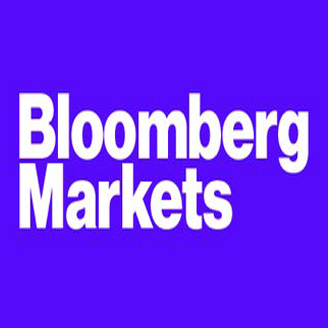 By Luke Kawa  and Yakob Peterseil

One of the hottest strategies of the bull market for stocks may be getting too popular for its own good, placing billions of dollars and a slew of money managers at risk of being burned.

The short-volatility trade, where investors sell options to bet against equity price swings, is becoming less profitable. The strategy has in theory made no money for investors 42% of the time since 2018, according to new research, compared with a recent average of about 30%.

The findings represent a new and potentially more insidious threat to a trade that famously weathered several post-crisis blow ups only to emerge stronger. At stake are billions in funds with names such as “buy-write,” “put-write” and “iron-condor,” not to mention the now notorious exchange-traded products hammered in last year’s “volmageddon” episode.

Options-selling strategies like this “nicely outperformed” the S&P 500 from 1990 to 2009, the analysis from money manager IPS Strategic Capital said. But returns since the financial crisis have petered out.

“Professional money managers and traders must ask the question, is the risk/return profile favorable and is it time to look at the other side of the trade?” authors Dominick Paoloni and Patrick Hennessy wrote.

CLICK HERE to read Paoloni and Hennessy’s article “Is Selling Options Still Worth the Risk?“.

Since 2009, a suite of indexes tracking options-selling strategies from CBOE have underperformed the S&P 500 Index by as much as 300 percentage points on a total return basis, data show. 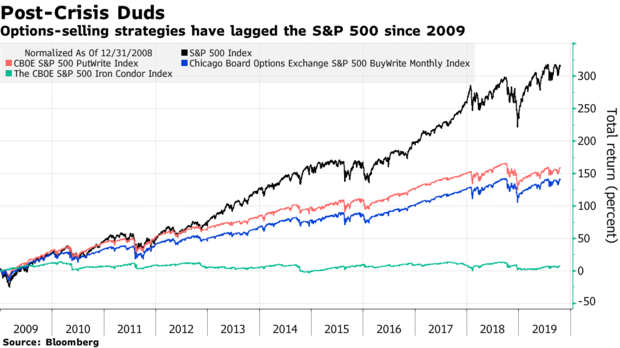 Paoloni and Hennessy argue the lag is attributable to the deteriorating spread between implied and realized equity index volatility, which is known as the volatility risk premium.

It’s the engine behind the short-vol trade: The tendency for the market to price in a higher cushion for price swings compared with what comes to pass — giving traders an opportunity to sell options and earn a premium along the way.

“We still think there is a volatility risk premium,” said Benn Eifert, CIO of QVR Advisors. “But it’s a third of what it used to be.” 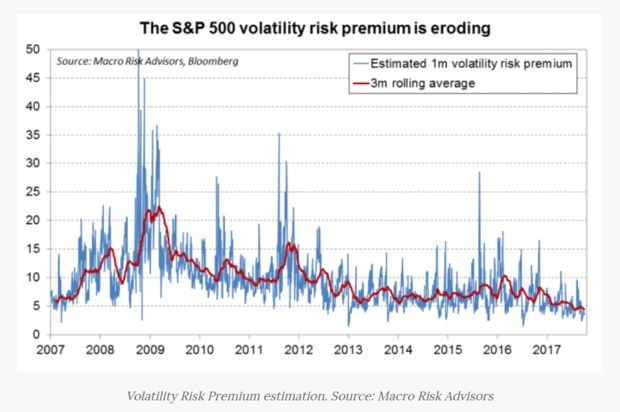 Throughout the 1990s and 2000s, institutional investors were generally short term buyers of options, and the desire for protection only intensified after the crisis. But as the U.S. bull market dragged on, the poor performance of those tactics led to institutions flipping to the other side of the trade, in particular through call-overwriting strategies.

“Ultimately, where we got to is a simple idea: Instead of owning a lot of risk and hedging, why not own less and be a seller of the thing you say is so expensive and complex?” said Thomas Lee, managing director of investment strategy at Parametric Portfolio Associates, which runs short-options strategies for clients including endowments, foundations and pensions.

The problem is excessive selling may have worn down the premium so much that it has deflated returns, creating pockets of leverage when firms try to compensate. These are prone to blow-ups, such as the one suffered by the Catalyst Hedged Futures Strategy Fund in 2016 and 2017.

“Like with many popular investing approaches that become very well-known and utilized, the question is what is the trade-off between scale and how well they can be expected to perform in the future,” QVR’s Eifert said. “Our view is we’ve tipped over that point where future returns won’t be as promising given the flow of capital into the space.” 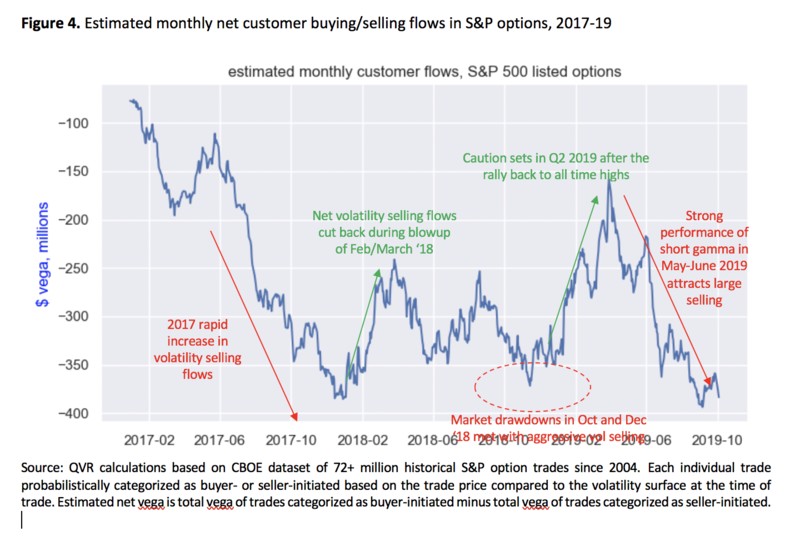 It’s notoriously hard to pin down the size of the short-volatility trade. Sanford C. Bernstein strategist Ethan Brodie says it’s “alive and well,” though ever-shifting in nature. With ETPs having shed most of their assets in the past 18 months, much of the exposure now resides in the murkier institutional market in the form of over-the-counter instruments like options and swaps, Brodie wrote in an August note.

Proponents of the strategy say any challenges are cyclical rather than structural in nature; a function of the enduring low-volatility backdrop created by unprecedented central bank accommodation. And rumors about the death of the trade haven’t stopped practitioners like Parametric. The firm continues to recommend selling a combination of out-of-the-money calls and cash-collateralized puts in order to smooth the expected returns of an equity portfolio.

“The volatility risk premium is like any other risk premium,” Lee said. “It will ebb and flow over time.”

The thinking goes that income received from selling the contracts provides a cushion against drawdowns, while clipping some potential gains. Parametric’s team closely monitors how its trades are digested by the market to get a qualitative understanding of how its activity may be influencing returns, Lee said.

Miller acknowledges that the volatility risk premium was lower over the five years ending 2018, but argues it’s more influenced by market regimes and cyclicality than structural dynamics. Her team forecasts the expected swings across a universe of options, looking across strikes and tenors to find the most attractive ones to both buy and sell.

For those who believe the short-vol trade is burning out, recent history offers some ideas. A simulated strategy of going long the contracts beat selling them from December 2017 through August 2019, IPS Strategic Capital found. Though long options trades come with plenty of their own risks, according to the quants at AQR Capital Management.

“You have to be exceptional at forecasting both the magnitude and the timing of large volatility increases, to simply not lose money on average,” they said in a recent paper.