The bad news for investors who waited this long to buy equity hedges is they’ve become eye-wateringly expensive. The good news is Wall Street thinks there are a few cheap strategies left.

A gauge tracking the price of bearish S&P 500 options versus bullish contracts — or skew — sits near an all-time high, according to Goldman Sachs Group Inc. Yet even now there are pockets of value for those waking up to risks like a U.S. recession, worsening trade war or Hong Kong unrest.

“Cheap protection still exists if you know where to look,” Bank of America Corp. strategists led by Stefano Pascale wrote in a note Tuesday.

Finding it takes some rummaging around in the complex underbelly of the options market. 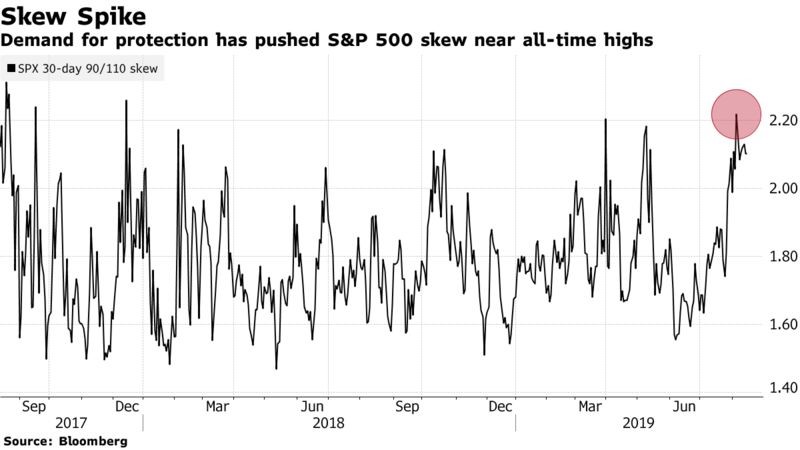 Pascale and team point out that while closer-to-the-money S&P 500 options prices have spiked, those further out-of-the-money remain relatively underbid. To capitalize on this “striking” phenomenon, they recommend a so-called put fly. The trade involves purchasing a bearish put option, selling two puts that are further below the current price and buying yet another that’s even further out of the money.

The S&P 500 Index slumped 2.9% on Wednesday and the Dow Jones Industrial Average plunged 800 points. Risk assets were roiled by weak economic data from Germany and China and by recession warnings flashed by the bond market. 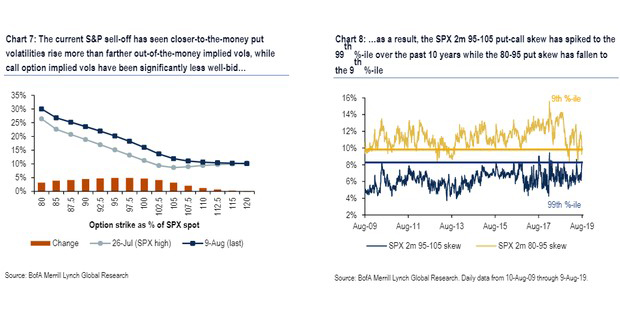 For those concerned about European stocks, the bank suggests funding protection on the Euro Stoxx 50 with short VStoxx puts. And recent hedging from structured-products issuers has pushed down two-year at-the-money volatility on the Hang Seng China Enterprises Index, making long-dated options on the gauge appear relatively cheap, they said.

“Generally, skew starts weakening after the first leg down as vol sellers roll options down and out and fear abates. Not at all the case right now,” Hennessy tweeted. Among the reasons for it could be portfolio managers holding more equity risk on their books and a relative dearth of put selling, he said.

Macro Risk Advisors has also crunched the numbers to find the best places for worried investors to protect against growing turmoil.